Last night was set to be an epic one and it did not disappoint with a whopping 12 players getting their hands on a WPT title, as millions of dollars were awarded in prizes. But more on that in just a moment.

The other big stories of the evening were the start of this week’s Big Game events, which are always crowd favorites. Not to mention, of course, the highlight of the entire festival…the $10 million guaranteed Main Event Championship. Day 1b wrapped up the starting flights in the flagship event, which means Day 2 takes place tonight!

Yesterday, Day 1c saw the biggest field of the three starting flights with 233 registrations. That meant a total of 489 entries were logged overall and of those, 104 progressed to Day 2, which also started yesterday at 7:05 pm (BST).

It was an all-British final, with Phillip Mighall and Ian Bradley going heads up for the title, trophy, and fighting for the biggest cash prize available to them. In the end, Mighall came out on top taking $36,263 from the main pot, compared to Bradley’s $36,212. The real difference was in the bounty prizes though, with Mighall banking a chunky $42,031, which brought his total to $78,243. That was in stark contrast to Bradley’s bounty winnings of $14,125. Still, it meant Bradley took home a very healthy $50,337 bankroll booster. 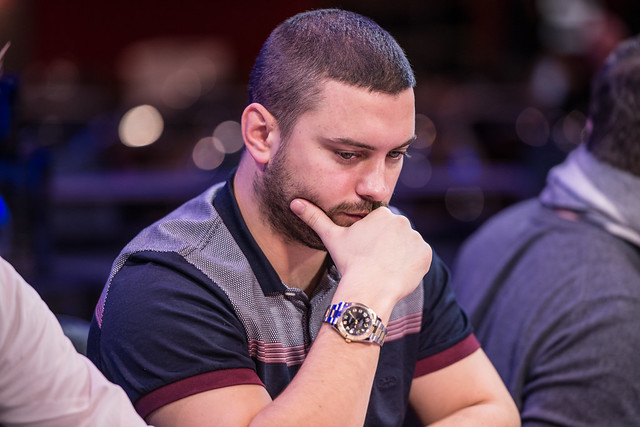 Eighty-eight players were paid, which meant 16 needed to go before the bubble burst. József Liszkovics (89th) was the unfortunate bubble boy, failing to eliminate any of his fellow competitors either, which meant the Hungarian was the last player to leave with nothing.

The turbo flight was once again extremely popular, with 793 players (including re-entries) descending on the virtual tables. By the time, late registration had closed for Day 1c, $209,600 had been generated, far exceeding the guarantee.

There was a lot to play for and Ignas Jasinevicius ($13,236 + $5,665) cut himself the biggest slice, but only by a slim margin, as runner up Krzysztof Nowakowski ($13,214 + $4,256) eliminated one more person with seven knockouts compared with Jasinevicius’s six. Noah Vaillancourt ($8,814 + $5,487) had a sensational run too, eliminating an impressive 17 opponents before he exited in third place.

Despite some huge numbers taking part (4,299 in total), the micro event fell short of its guarantee, giving the 726 survivors who advanced to Day 2 some extra value to play for. It took ten and a half hours to play out, with the heads-up match finally concluding at 5:33 am as Brazilian player Yago Alisson Da Silva Sousa defeated Jordan Smyth from the United Kingdom, to take down the title and $3,400 + $1,538 in cash. Smyth started the day with the overall chip lead and banked a runner up prize of $3,395 + $602 for his efforts.

The first of the one-day events kicked off last night’s proceedings, with an early kick-off of 3:05 pm. 197 entries had been paid by the time late registration closed, with 32 of those reaching the payout stage of the competition.

A $1K event is naturally going to attract some quality poker talent and this tournament was no exception with almost every player who graced the player list a well-known figure in the industry. It was Hungarian pro Tamás Ádámszki’s turn to shine as he took his first title of the series and locked up $40,130 in the process.

Ádámszki took out yesterday’s headliner, and Day 1b chip leader, Preben Stokkan heads up. That left the Norwegian to pick up a very healthy runner-up prize of $29,210. British pro Jonathan Proudfoot ($20,840), partypoker representative Dayane Kotoviezy ($15,600) and Russian regular Sergei Denisov ($11,000) all banked themselves five-figure scores for reaching the top five.

It may have had a fifth of the buy-in but there were some big prizes up for grabs, attracting some big players to the tables. Mirko Schiano Di Tunnariello ($18,632) came out on top of a 490-strong field, to nab himself the biggest prize after beating József Liszkovics heads up. Liszkovics turned his night around after bubbling the $1K Weekender, bringing home $13,289 for getting as far as second.

Moldovan No.1 Pavel Plesuv ($9,113) took third place, while Santtu Ojala ($6,400) and Alfred Karlsson ($4,550) took fourth and fifth spots. Yann Dion was another familiar name and the Canadian had a great run too, taking $3,300 for his sixth-place finish. WPT Champion Ema Zajmovic also came close to a big result but had to settle for $910 after busting in 21st place.

Almost two thousand buy-ins were paid, with 1,972 the final number once late reg had closed. It took an epic 11 hours of battle for Jordan Gibson to come out on top. He took $6,630 for first, while Julian Comninos won $4,711 for placing second.

The prize pool may not quite have reached its guarantee but there were still 378 players for Adam Hendrix ($16,443 + $18,537) to outlast in order to take down the larger buy-in of the two 7-Max PKO events. The last person standing in his way was Raul Martinez Gallego ($16,422 + $1,890) and though both players took an almost identical amount from the main prize pool, Hendrix banked almost ten times the amount in bounties! 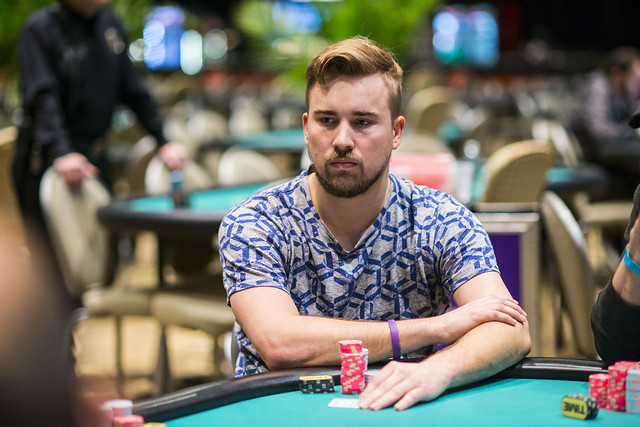 Meanwhile, Faris Issa Jamil Qumsieh had his second big cash of the night, collecting $828 + $1,047 and narrowly missing out on his second final table (after coming fourth in the $1K main) when he exited in ninth place. 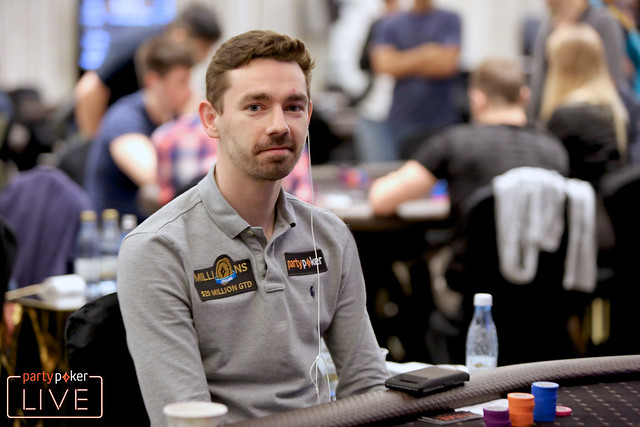 A total of 69 players were in the running, with re-entries included in that number and the fast format appealed to other notable players too. Included in those were Charlie Godwin (10th) who technically bubbled, but both she and Conor Beresford (11th) banked $500 in bounties. Benjamin Chalot (12th) was the last player to leave truly empty-handed.

Each week these tournaments have been extremely popular, with the $5K event appealing to some of the worlds best. This week, the 8-Max freezeout delivered again, with 202 players flocking to take their stab at the huge guarantee.

Paul Höfer (104,354,053) is the only player returning with a nine-figure stack (that is something we don’t often get to say) after he finished up with the decisive chip lead in the mini event. The 564 starters were reduced to 12 by the end of Level 28, which made for a runtime of seven hours and 45 minutes.

There are some fantastic prizes up for grabs, with $55,222 up top. All those still in contention have secured themselves at least $3,960 for getting this far. Online specialist Andreas Berggren (13th) won’t be in the mix after the Swede was the last player to fall before the whistle blew.

The micro edition featured 1,766 registrations and of those, 44 have qualified to the final Day. The top 20 was littered with Brazilian flags and names, most notably Guilherme Magaldi who bagged biggest with 83,546,850 to play with. Luis Felipe Souza (74,028,825) was another, finishing just a whisker behind second biggest stack Matias Arosuo (74,956,139).

There were 490 players (including re-entries) in the second of two starting flights in the flagship event of the series. Added to the 521 who took part in Day 1a, a total of 1,011 entries have combined to beat that incredible guarantee. Now that we know $10,110,000 is the collective prize pool, WPT is excited to confirm that $1,715,667 has been set aside for first place, with another six-figure amount of $1,231,600 for second, and $814,663 the huge prize for whoever takes the bronze medal for third place. 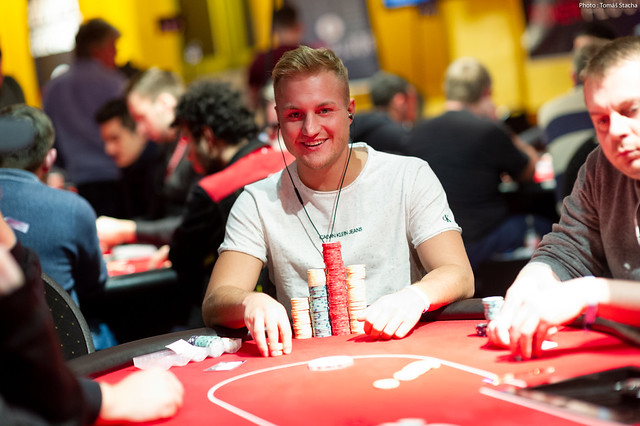 Yesterday’s flight elicited most of the biggest stacks that will start Day 2, all except Blaž Žerjav (4,400,082) who claims pole position when the second day starts at 7 pm this evening, with Rolle, Szymanski, Simionato and Imsirovic the rest of the top five stacks.

One player who will not be among them is Matas Cimbolas (88th). The Lithuanian had a dreadful end to the night after he got it all in three-handed with pocket-aces against Pascal Hartmann’s (89th) pocket-kings and Rolle’s ace-king of diamonds. Rolle had the two players covered and hit one diamond on the flop. To more diamonds on the turn and river gave him the flush, sending Cimbolas and Hartmann packing shortly before the end. 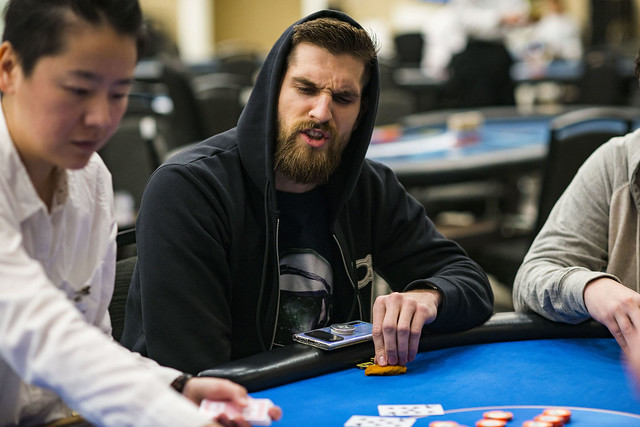 There are twelve 30-minute levels on the clock for this evening and tonight we will see the bubble burst, with just 20 of the survivors needing to go before the money stages are reached. There is a $23,253 min-cash for those who make it to 136th place. 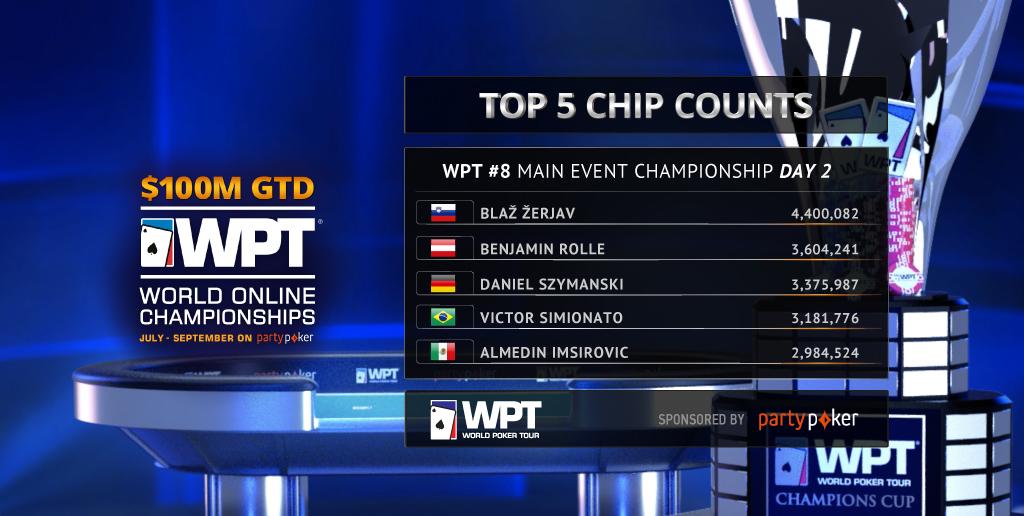 Plenty more treats are instore for players this evening, with seven one-day events to get your teeth stuck into. They will run alongside the finales of the Big Game events and Day 2 of the Main Event Championship! 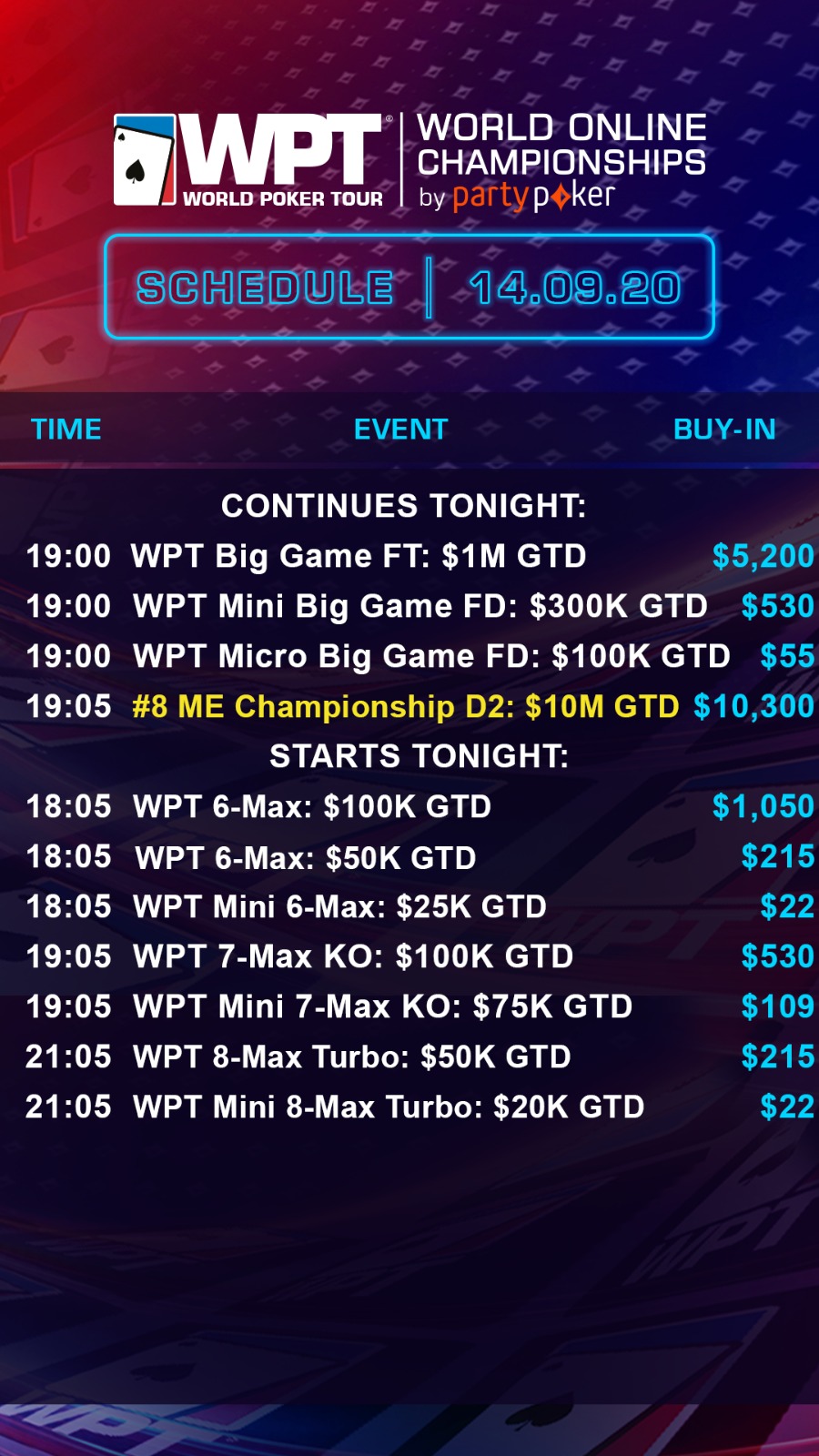