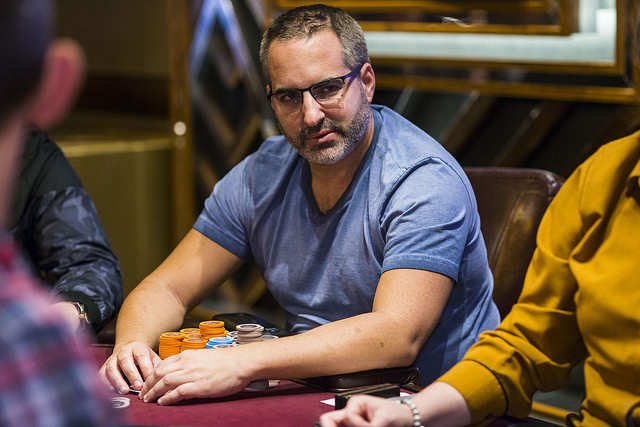 Day 2 of the Season XVI WPT Maryland at Live! Casino concluded with 29 players remaining from the field of 561. Each of the remaining competitors is guaranteed $12,000, but with $389,405 up top for the champion, there’s plenty more to play for.

Leading the charge into Tuesday’s Day 3 is Grigoriy Shvarts with more than 1.5 million. Shvarts helped himself to the chip lead by knocking out Hyon Kim in 31st place with pocket fours versus the ace-nine of Kim. Shvarts flopped a full house and held from there.

Nipping at the heels of Shvarts was Matt Glantz, a well-known poker pro from Pennsylvania with nearly $6.5 million in live tournament earnings entering this event. Glantz’s record includes 16 World Poker Tour cashes, but he’s yet to win his first WPT title. In fact, Glantz has yet to reach an official WPT final table, if you can believe it.

“I don’t really play many tournaments anymore,” Glantz said. “I skipped the WPT Borgata last week and that’s in my backyard. With responsibilities with kids and work, I rarely play tournaments. This one worked out in my schedule and it’s a nice place here at Maryland Live! I definitely do not take it for granted getting chips this deep.”

The largest WPT score on Glantz’s résumé came from a ninth-place finish in the Season XII WPT Seminole Hard Rock Poker Showdown for $100,912, but that’s a score he’ll be looking to top here in Maryland. The question now is, what is his plan of attack going forward with such a big stack this deep in the tournament?

“Just depends on my table,” Glantz told WPT.com. “I’ll take a look at my table and see who’s doing what and just make decisions based on the best available options.”

These days, Glantz admittedly plays more cash games than tournaments, and those cash games he plays in are usually mixed games. But where some may see being a cash game player as a disadvantage, Glantz uses it to his advantage.

“You get to see people’s emotions a lot of differently and learn about how people handle things because you play longer hours in mixed games,” Glantz said. “You see more people steaming and being happy when they’re winning and you get more in tune with that in tournaments and use that to your advantage. Maybe they open up their ranges wider when they just lost a couple pots, so there are some intricacies to those situations.”

Papazyan is also the only WPT Champions Club member remaining.

Fletcher’s run is particularly interesting, as he won his way to this event via a social media promotion run by Live! Casino.

Morgan is a bit of a renaissance man, as written by Matt Clark, and is coming off a ninth-place finish in the recent WPT Borgata Poker Open Championship.

Day 3 will kick off on Tuesday at 12 p.m. ET from Live! Casino in Hanover, Maryland.