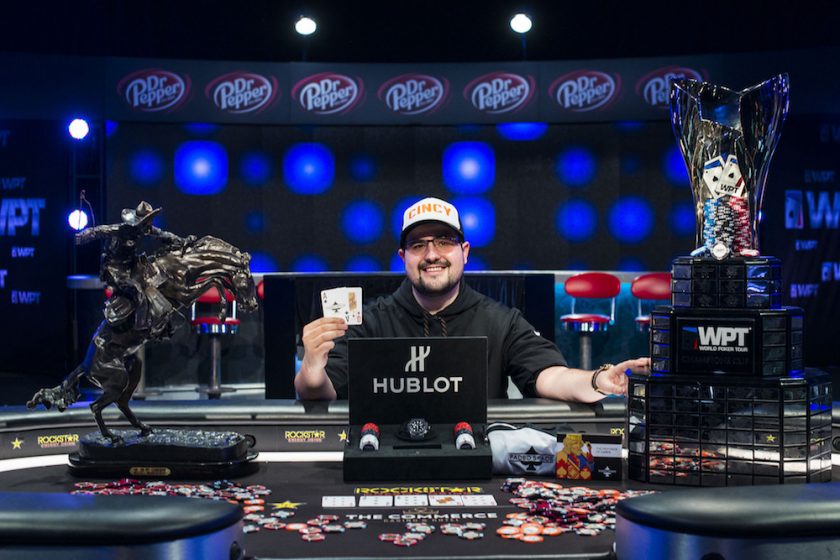 The Season XVI WPT Tournament of Champions is around the corner. On Thursday, May 24, 2018, World Poker Tour title holders will embark on fabulous Las Vegas to compete in the prestigious event at ARIA Resort & Casino. The final table will play out at Esports Arena Las Vegas at Luxor Hotel & Casino on Saturday, May 26. In lead up to the event, WPT.com is featuring all of the winners from Season XVI, who, along with the hefty first-place prize, earned a $15,000 seat into the season-ending WPT Tournament of Champions. Next up is Dennis Blieden, who topped a field of 493 entries in the WPT L.A. Poker Classic Championship to win $1 million.

Swashbuckling without fear and striking down professionals in his wake, Dennis Blieden is unlike any Season XVI champion on the World Poker Tour. Blieden conquered a field of 493 players with many of the game’s best included to win the $1 million first-place prize at the WPT L.A. Poker Classic. The unconventional, hyper-aggressive tactics employed by Blieden in the elite event caught his opponents off guard for the duration of the event.

In his WPT Main Tour debut, Blieden defeated players with millions of dollars in winnings to their name by refusing to shift out of fifth gear. Blieden’s reward for his play is an eternal place in the WPT Tournament of Champions.

The relative beginner to the tournament game is basking in the glow of his win. Career tournament cash number three was the charm for Blieden. A Los Angeles-based accountant from Cincinnati, Blieden calls his entrance into the WPT Champions Club the top accomplishment of his entire life.

“I have always been extremely passionate about the game of poker, and to be able to play and win at this level in my first-ever WPT still feels like a dream,” Blieden said. “I’m very blessed to have a great professional career that I am proud of, but this definitely takes the cake.”

Blieden hit the media circuit in his hometown after the victory. Cincinnati Bengals gear adorned Blieden at the televised final table. The sporting dry spell of the city was momentarily broke by an underdog who is proud to call Southern Ohio home.

“I think the coolest thing for me was being interviewed by sports talk radio back home in Cincinnati,” Blieden told WPT.com. “The guy that runs the show, Lance McCallister, is the voice of sports in that city, and being invited on the show was a surreal experience. I received a lot of positive feedback from listeners back home, and it feels good to be able to say, ‘I brought home a championship for the ‘Nati!'”

The moment with McCallister is when his win became real. A dream turned into a prize shared with listeners who represent the 513 area code.

“It fully sank in when I did the radio interview in Cincinnati,” Blieden said. “Being interviewed on a sports talk show I listened to growing up, and the excitement that the broadcaster had sharing my story, I really started to realize just how cool this all really was.”

A million extra dollars in Blieden’s bank account changes his outlook on poker. The success attained allows for an extravagant buy-in and an overall increase in volume for the summer.

“In the short term, I think you’re going to be seeing me on the felt much more often,” Blieden noted. “I have no plans on traveling the circuit or anything like that, but entering the Super High Roller Bowl and playing a more robust schedule at the WSOP are definitely things that would not have happened without this win. If I am able to continue to find success in those events, maybe it’ll become even more long-term.”

For a player with limited tournament experience, Blieden handled a large stack with precision for most of the event. Blieden started every day of the WPT L.A. Poker Classic with over 100 big blinds with the exception of Day 2. The final table saw Blieden open play with 138 big blinds and he passed Toby Lewis right away for the chip lead. Blieden complete his journey is 79 hands and in less than five hours.

The aggression used by Blieden was his way of finding an edge against players used to the practice of patience in a tournament where blind levels peaked at two hours per. Blieden’s awareness of his playing habits helped him to adjust and punish passive opponents.

“I’m probably one of the most aggressive champions in terms of final table play that the WPT has ever seen,” Blieden said. “I admittedly have not watched every final table, but I believe 54% of hands won over only 79 total hands might both be potential records that make my win unique from the rest.”

Off-guard is one way to describe how players felt when facing down Blieden.

WPT Raw Deal analyst Phil Hellmuth took the frustration up a notch when he cursed Blieden for his “goofy” play.

The criticism levied by Hellmuth did not waver Blieden’s mood. In fact, Blieden recalls the encounters as his favorite moments of the tournament.

“Getting berated by Phil Hellmuth is easily my favorite memory! I always thought his ‘Poker Brat’ persona was a bit of a show, but after experiencing a 15-minute expletive tirade because he made an incorrect call, I can say first hand it’s not. He really just makes it so easy and enjoyable to needle him.”

Blieden eliminated Hellmuth late on Day 4 and followed that up by sending three-time WPT Champions Club member Anthony Zinno out in eighth place.

Big names are not all that excite Blieden for the WPT Tournament of Champions. He hopes to encounter a champion some may have forgotten.

“The WPT Champions Club boasts some of the most respected and admired professionals in the game, so it’d be hard to think of just one,” Blieden said. “Scrolling through the list, the one that caught my eye the most was Dwyte Pilgrim. What happened to that man? I’d love it if he showed up for the TOC!”

The WPT L.A. Poker Classic served as Blieden’s coming out party to the poker world. He has quite a reputation to live up to when the Tournament of Champions starts on May 24.