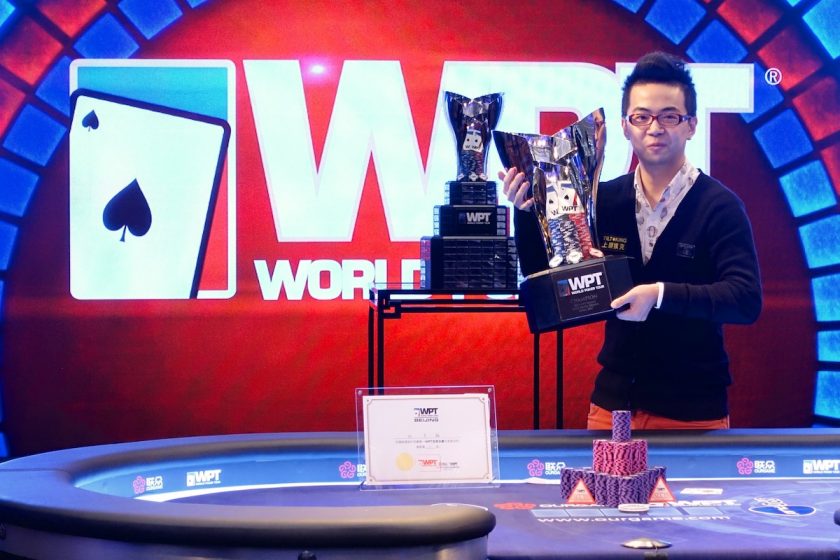 The Season XVI WPT Tournament of Champions is around the corner. On Thursday, May 24, 2018, World Poker Tour title holders will embark on fabulous Las Vegas to compete in the prestigious event at ARIA Resort & Casino. The final table will play out at Esports Arena Las Vegas at Luxor Hotel & Casino on Saturday, May 26. In lead up to the event, WPT.com is featuring all of the winners from Season XVI, who, along with the hefty first-place prize, earned a $15,000 seat into the season-ending WPT Tournament of Champions. Next up is Pete Chen, who topped a field of 400 entries in the WPT Beijing Main Event to win $299,485.

Season XVI on the World Poker Tour opened in Beijing, China, for an exclusive “invitational” event of 400 entrants. Pete Chen became the first player to carve his name on the WPT Champions Cup for the season and collected $299,485 for his win.

In a succinct 111-hand final table, Chen entered as the chip leader and wrapped up his win in four hours.

The victory marked a milestone for the self-described “maniac.” Chen claims more than 170 cashes from the time he became a tournament regular earlier in the decade. Years of patience and close calls are no more for Chen. He is forever a WPT champion and a participant in the Season XVI Tournament of Champions.

“Since I started to play tournaments in 2013, I have been like a maniac,” Chen said. “I have had some achievements these years, made the money about 170 times, won dozens of side events. But this is the only time I won a main event. As such, for me, it is a milestone and a record with significant meaning.”

The work ethic utilized by Chen takes him all over the globe from his home in Macau in search of tournament glory. Wins in side events pale in comparison to the thrill of becoming a WPT champion for Chen. When Chen won the title, emotions surfaced that were never before seen from him. The victory remains the thrill of a lifetime.

“It is so hard to describe with words,” Chen said. “I remember when the river was dealt and I was sure I had won, both of my hands were trembling. I never felt that shock and excitement no matter how many times I won other side events.”

According to HendonMob.com, those side event wins total 14 for Chen, along with other unrecorded wins. He is a veteran of tournaments of all buy-in levels and the $15,000 seat for the WPT Tournament of Champions is a chance to collaborate with other professionals.

Chen looks at the WPT Tournament of Champions from a unique perspective. As the sole representative of the Asian poker world in the tournament, Chen offers a new outlook to the game and, perhaps, an unfamiliar playing style.

“Being able to compete with the best poker players from the world in this big buy-in event should be a very good opportunity to study and exchange ideas,” Chen told WPT.com.

The tournament grind stayed at a brisk pace for Chen following his win in April. The World Series of Poker was right around the corner and Chen booked a room at the Rio for the seven-week duration of the marathon festival. According to Chen, he never left the casino over the span of close to 50 days.

Chen departed Las Vegas with eight cashes, coming from buy-ins ranging from $365 up to $5,000. His best result came in the $5,000 No-Limit Hold’em event where he came close to winning a WSOP bracelet, but settled for second place and $382,122.

Since last summer, Chen continued to travel the world in search of more money and trophies. Chen’s travel schedule in between August 2017 and present day includes cashes in Korea, the Philippines, Spain, and Japan.

The inaugural WPT India festival attracted Chen in November. Chen added another cash to his list in a side event. All told, 2016 wrapped up with Chen second overall in total cashes across the globe with 61.

The World Poker Tour continues to expand across Asia and Chen is hopeful to play more events on his home continent as they become available.

“I live in Macau,” Chen said. “It is more convenient for me to attend events in Asia. I hope WPT can host more events in Asian territory.”

Chen’s trip to Las Vegas and ARIA is the first time he will be playing against any of the competition that awaits in the WPT Tournament of Champions lineup, but the experience Chen carries from playing versus diverse fields prepares him for any lineup he faces.

The expectations are simple for Chen. He wants to win.

Expect to see Chen play a few events around Las Vegas leading up to the WPT Tournament of Champions. All aspects of his game are required to defeat the formidable field and if there is one thing about Chen that is a guarantee, he won’t be rusty.