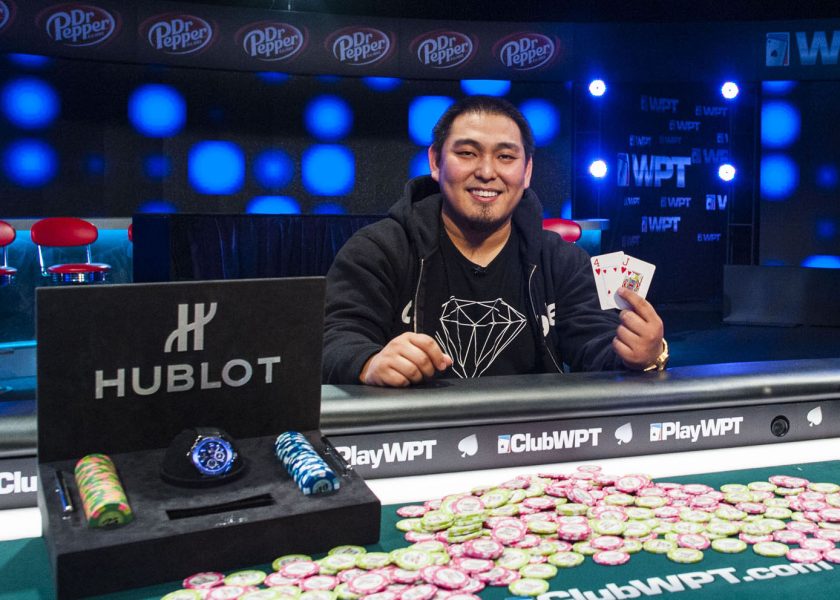 The Season XVI WPT Tournament of Champions is around the corner. On Thursday, May 24, 2018, World Poker Tour title holders will embark on fabulous Las Vegas to compete in the prestigious event at ARIA Resort & Casino. The final table will play out at Esports Arena Las Vegas at Luxor Hotel & Casino on Saturday, May 26. In lead up to the event, WPT.com is featuring all of the winners from Season XVI, who, along with the hefty first-place prize, earned a $15,000 seat into the season-ending WPT Tournament of Champions. Next up is Jay Lee, winner of WPT Choctaw, who topped a field of 924 entries in the WPT Choctaw Main Event to win $593,173.

The North American portion of Season XVI on the World Poker Tour opened with the start of this season’s trend of relative unknowns striking down fields of pros. Jay Lee walked out of WPT Choctaw last August $593,173 richer after an impressive performance in a field of 924 entrants.

After the win, the 27-year-old put poker on the backburner to invest in a future for himself off the felt. Lee opened a bar in his hometown of Austin, Texas, called “Pour Choices” this March. The time required to set up and operate the business is worth it for Lee. The poker itch needs attention, though, and the best treatment is the upcoming WPT Tournament of Champions at ARIA Resort & Casino in Las Vegas.

“Life’s been great since the tourney win,” Lee said. “$600K is a great jump start to opening a business. It’s given my poker life a nice balance.”

Lee grinded cash games in the local Texas and Oklahoma areas with the rare tournament endeavor. Poker and working at his family’s restaurant paid the bills while the University of Texas McCombs School of Business graduate figured out what direction his life would go.

Thanks to his win and the cash influx, Lee is able to set himself up for a longterm future with poker waiting for him whenever he is ready to play.

“Poker has been a great source of income to help me pursue other things in life,” Lee told WPT.com. “At the end of the day, it’s worth all the stress. Winning the WPT in Choctaw is my biggest accomplishment so far, but won’t be my biggest in life. Poker will always be a big part of my life, but I want to have multiple sources of income when it’s all said and done.”

The WPT Tournament of Champions will be the first event played in by Lee since WPT Choctaw. Lee says his playing schedule is limited to cash games “here and there.” Once the business is fully off the ground, Lee claims the tournament schedule then returns.

Lee is excited about the prospects of participating in an exclusive event like the WPT Tournament of Champions. The field represents as arduous of a challenge that exists in poker, according to Lee.

“I look forward to playing with everyone in the toughest tournament there is,” Lee said. “There won’t be any soft spots and should be a good time.”

Although Lee’s win came as a surprise to the poker world-at-large, his support group was that of a local favorite. The home love worked for Lee, who held strong through the variables of a 190-hand final table.

A member of Lee’s rail is now a part-owner of Pour Choices. Per the Daily Texan, Jeffery Pao, a lifelong friend of Lee, was the one leading the charge. There was also a WPT Champions Club member cheering from afar.

“[The win] sunk in pretty quickly,” Lee said. “My boys sweated me real good and definitely made the experience great. I even got a FaceTime call right after from fellow WPT champ Matt Lapossie. We have two champs in our poker crew.”

Lapossie was victorious in the Season XII WPT Fallsview Poker Classic after he defeated another WPT Champions Club member heads up in Dylan Wilkerson.

In an interview with the Daily Texan, Pao said, “It was a really thrilling eight or nine hours. I came up the night before and we hung out and reminisced and we were like, ‘It will be life-changing no matter what.'”

The action of the final table cooperated to give Lee and his friends their money’s worth. Some of the hands that propelled Lee to his win included winning with ace-queen against Josh Kay’s ace-king to eliminate Kay in third place, a key flip against Michael Stashin to stay alive, and flopping a full house to win heads up against Jeb Hutton.

All of these hands and more can be seen on FOX Sports Regional Networks with Season XVI with WPT Choctaw leading off the televised events that will reair throughout the season. If you don’t want to wait for a reair of the show, you can sign up to ClubWPT.com, where VIP members get access to the full WPT library of shows as part of your subscription. This is, of course, in addition to being able to compete for more than $100,000 in cash and prizes each month, including seats to WPT events, no purchase necessary.

When Lee formally rejoins the tournament circuit, to win another title is a priority. In the immediate future, we’ll see him return on May 24 when the WPT Tournament of Champions opens at ARIA Resort & Casino.

“Shipping tourneys are rare enough and shipping a WPT is even harder,” Lee said. “I hope to win more in the future.”

Lee might be a longshot compared to the rest of the field, but that is a position he already thrived in once during Season XVI.

However the WPT Tournament of Champions unfolds for Lee, there is a bar back home in Austin with his name literally on it that has a cold beer waiting for him.