Vikash Mantri (pictured) topped a field of 527 players to win the WPT India Main Event on Monday at Deltin Royale Casino in Goa, India. Mantri earned the title and INR6.03 million (approx. $92,000) in first-place prize money. “It is amazing, I can’t believe it,” said a very happy Mantri after the victory. “Thanks to… 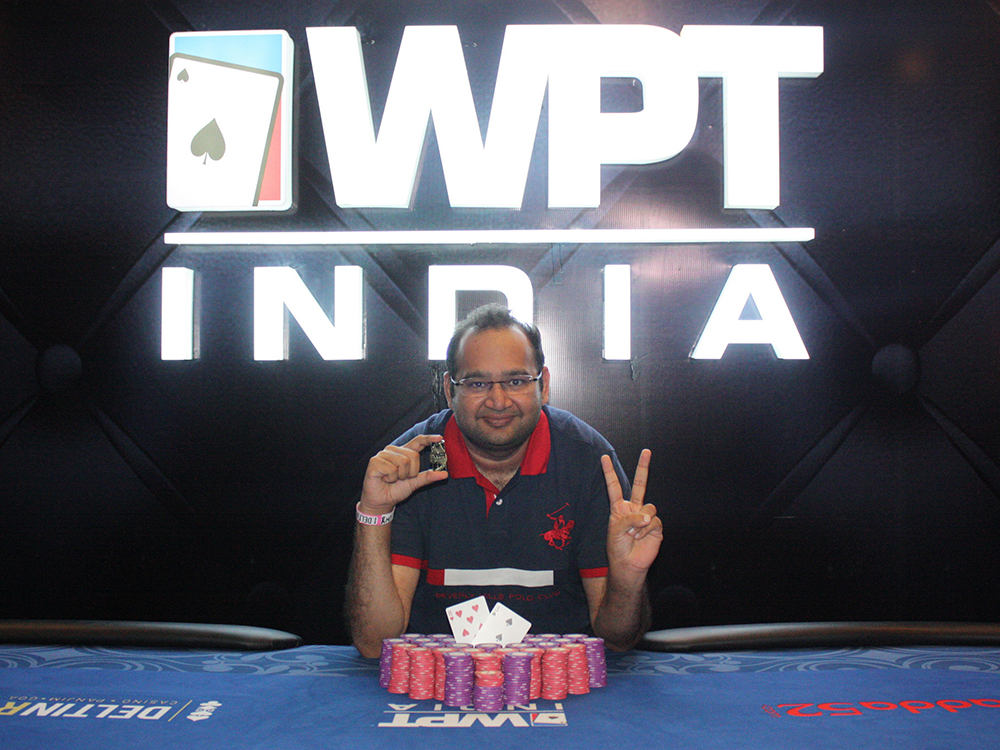 “It is amazing, I can’t believe it,” said a very happy Mantri after the victory. “Thanks to my friends who kept cheering me up all the time, thank you so much, it’s awesome to have you.”

Mantri came into the final table as the chip leader, but he was behind when heads-up play against Arjun Arora began. What ensued was a wild heads-up match in which Mantri picked off two big bluffs from his opponent, including one on the final hand of the tournament.

“Basically, I knew I was ahead, but to get the money in, I had to make an inducing bet, which is what my friend told me,” Mantri said of the final hand. “‘When you have a good hand, induce a bluff.’ I did exactly that, I thought I was good and therefore got my money in. The entire reason for this was coaching from a friend.”

You’ll notice in the winner’s photo that Mantri is holding a card protector in his right hand. That’s the special WPT card protector to commemorate the awarding of the WPT’s one-billionth prize dollar. For Mantri, this card protector has some new meaning.

“I’m not a person who is superstitious, until today, and things changed when the WPT gave us a card protector,” Mantri said. “Now let me tell you, none of the other players used it, but I used it for all my hands, and it worked! I’m a bit superstitious now. I think I should get more of these, please (laughs).”

Cards got into the air a little after 4 p.m. local time between the final nine players. Shortly after play began, the short stack, Gaurav Chauhan, scored an early double up on the second hand of play. Manish Lakhotia then doubled up courtesy of Anuj Wadhwa, and then the field lost the first player of the day when Wadha was eliminated in ninth place.

Anil Adiani then doubled up before Sunny Vijaywari took his leave in eighth place, and the elimination of Kiran Kumar in seventh place right after that took the final table down to six players before the first break in play.

There were no less than five double ups before the field lost Pavan Jain in sixth place, and that made it the longest period without an elimination at the final table. Mantri then scored his third double up of the day at the expense of Adiani, who busted a short time later in fifth place.

Chauhan was the short stack with four left, but although he was able to double up once more, Chauhan exited the tournament in fourth place the next time he got all of his chips into the middle. The quick pace of play continued when Lakhotia made a straight on the turn, only to have Arjun Arora make a full house on the river, and Lakhotia was knocked out in third place.

The chip counts at the start of heads-up play had Arora out in front with 8.6 million against the 4.6 million of Mantri. Only a few hands transpired before Mantri turned the tables by winning the largest hand of the tournament (11.5 million) when he picked off a bluff by Arora on the river.

Arora was able to double up once to prolong things, but the next time he moved all in was the final hand of the tournament. On the final hand, Arora completed the small blind preflop, and Mantri checked his option. Both players checked the

flop, and then the

The river delivered the

for nothing but jack high, and Mantri revealed the

for a flopped two-pair.

Arora was eliminated in second place, good for INR3.947 million (approx. $60,000), and that made Mantri the first-ever WPT India champion. Mantri took home INR6.03 million (approx. $92,000) in prize money and the coveted title.

That concludes coverage from the WPT India Main Event. A special thank you goes out to the Deltin Royale Casino Casino for hosting a spectacular series.

By Danny McDonagh  One of my roles at WPT has been to broaden the number of WPT events in the Asia Pacific and as part of this expansion of events, we had our first ever Asia Swing commencing this September in the countries of Japan, Korea, and Vietnam. The three events comprised a return to…

By Ryan Lucchesi Nikunj Jhunjhunwala topped a field of 697 players to win the WPT India Main Event on Monday at Deltin Royale Casino in Goa, India. Jhunjhunwala earned the title and INR 6,635,000 in first-place prize money. “It’s sinking in now that I’ve taken it down,” said Jhunjhunwala after the biggest win of his poker…

News Matt Clark Under The Lights: India, Jacksonville, and Millions Guaranteed in Montreal!

By Paul Seaton This week in our regular feature series Under the Lights, we’re going right around the world to catch up with the World Poker Tour team as they travel to India, Australia and even trek all the way to Las Vegas in a suit. Well, kind of. WPT India Welcomes Huge Turn Out…