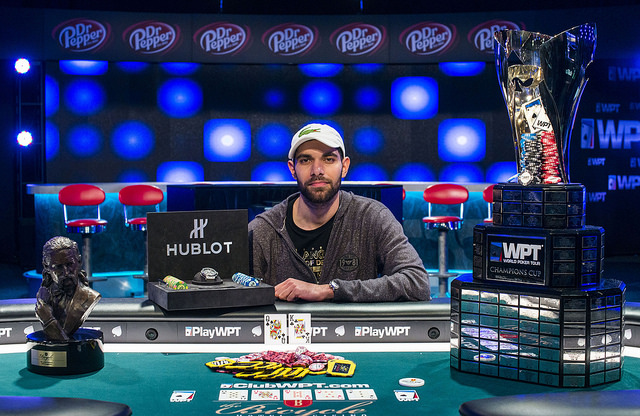 The Season XVI WPT Tournament of Champions is around the corner. On Thursday, May 24, 2018, World Poker Tour title holders will embark on fabulous Las Vegas to compete in the prestigious event at ARIA Resort & Casino. The final table will play out at Esports Arena Las Vegas at Luxor Hotel & Casino on Saturday, May 26. In lead up to the event, WPT.com is featuring all of the winners from Season XVI, who, along with the hefty first-place prize, earned a $15,000 seat into the season-ending WPT Tournament of Champions. The final champion we’ll feature is Art Papazyan, who won not one but two WPT titles in Season XVI. Papazyan first topped a field of 763 entries in the WPT Legends of Poker to win $668,692. He then defeated a field of 561 entries in WPT Maryland at Live! Casino for $389,405.

In April 2016, Art Papazyan quit his job working as a security guard in Los Angeles. It was a job where Papazyan calls himself “the worst employee ever.”

Papazyan’s new profession of poker took an exciting turn in August when he won the WPT Legends of Poker title. A $5-$5 bankroll turned into lifetime membership in the WPT Champions Club. Seven months later, Papazyan closed Season XVI with two titles and the prestigious honor of Hublot WPT Player of the Year.

The full season moved Papazyan from local cash game legend to one of the top young stars in the game. Only 25 years old, Papazyan’s life changed for the better in terms of stakes he can play in cash games and the motivation to improve.

“This WPT season has changed my life in many ways,” Papazyan said. “The two most drastic ways are, of course, the monetary side and it’s also made me work on my game so much more because now I’m battling top players at high stakes and I have to make sure I’m always improving.”

Tournaments were not a source of bragging rights for Papazyan up until August. Around Los Angeles, Papazyan became known for his cash game prowess soon after he picked up poker full-time.

When Papazyan won the WPT Legends of Poker event, he figured giving a run at the Hublot Player of the Year honors was worth the “once-in-a-lifetime opportunity.”

So, naturally, Papazyan won the very next event he played at WPT Maryland. The win put Papazyan far in front of all competitors and he faded a late charge from Joe McKeehen to lock up the prize.

Papazyan jumped back into his cash game habitat after WPT Maryland and only played in three WPT Main Tour events between October and the end of the season.

Many WPT Tournament of Champions competitors face Papazyan for the first time in the final week of Season XVI, but he is not worried about having to prove himself to anyone he challenges.

“I know what I’m capable of and I’m confident in my game,” Papazyan told WPT.com. “TOC is a great tournament because there’s so much value. I’m excited to wrap up my first WPT journey and start my first WSOP journey.”

The natural talent possessed by Papazyan is evident. His table presence signifies a player to not mess with. Papazyan’s natural aggression earned him pots without showdown deep at WPT Maryland and allowed him to chip up at the final table.

Staring down Phil Hellmuth and J.C. Tran at WPT Legends of Poker came with ease.

Papazyan may not be a tournament expert but the realization of how difficult it is to win the first two WPT events of his life is not lost.

“If I go back in time and try to do what I did again it would probably take me over a million tries,” Papazyan said. “I’m very fortunate to be where I am today, for sure.”

One million tries might be the number of simulations required to match this season, but 10 years from now, Papazyan knows what he will recall from his rise to stardom. Papazyan said that his goal in poker is to be able to play in the best cash games available to him. The want to compete against the best players is not preferable in cash games, but it is an inevitably in tournaments. Papazyan knew this when he entered WPT Legends of Poker and let the variables within his control lead him to the winner’s circle.

“I’ll remember how hungry I was to go out there and compete with the best,” Papazyan said. “I’ll remember how I thought that even though everyone else had experience on their side, it didn’t phase my determination and willpower. And I hope in 10 years, I’ll have the same mindset except I’ll have 10 years of experience under my belt.”

Either way, Papazyan forever holds a seat in the WPT Tournament of Champions and gets to prove at least once a year that he belongs in the rare group of players with multiple wins.

The Hublot WPT Player of the Year race provided some drama near the end of Season XVI thanks to the epic run by Joe McKeehen at the WPT Bobby Baldwin Classic. But in reality, the race was over from the moment Papazyan won WPT Maryland.

The kid from Los Angeles made it from the guard booth to the Champions Club. Only on the World Poker Tour.