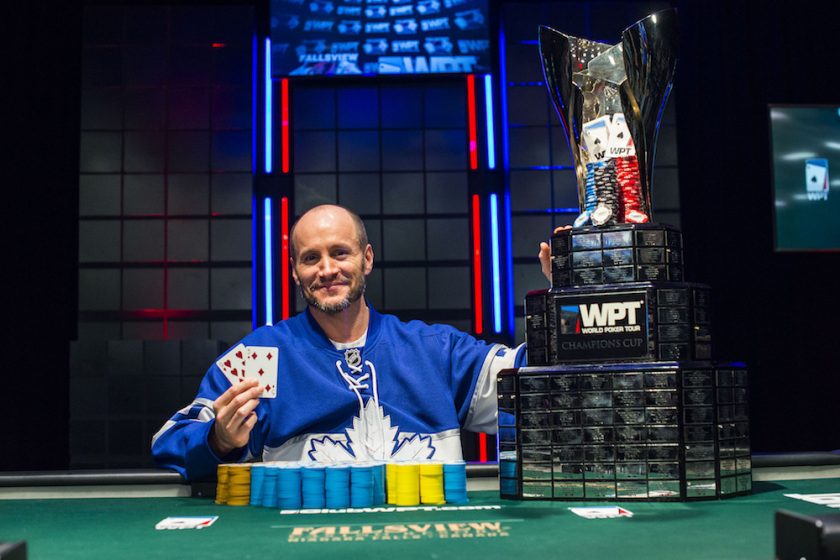 The Season XVI WPT Tournament of Champions is around the corner. On Thursday, May 24, 2018, World Poker Tour title holders will embark on fabulous Las Vegas to compete in the prestigious event at ARIA Resort & Casino. The final table will play out at Esports Arena Las Vegas at Luxor Hotel & Casino on Saturday, May 26. In lead up to the event, WPT.com is featuring all of the winners from Season XVI, who, along with the hefty first-place prize, earned a $15,000 seat into the season-ending WPT Tournament of Champions. Next up is Mike Leah, who topped a field of 517 entries in the WPT Fallsview Poker Classic to win $352,985.

WPT Fallsview Poker Classic winner Mike Leah is as prideful as they come. A glance at his Twitter bio shows off a wall of fame for Leah’s tournament conquests. In February, Leah added “WPT Champion” to the list after his win in native Canada.

The WPT Champions Cup is special for Leah, who measures himself against the best in the world.

“The history and how long the tour has been around and the fact that the event has been on TV,” Leah said about the WPT. “The televised experience is something that is unique. Tough tournaments to win and there’s usually a good amount of money to win as well.”

Wins are the vital statistic used by Leah to gauge where he stands in the poker world.

“Basically, when I compare myself to other players, GPI rankings and money earnings are things you can’t match up against other people,” Leah said. “To be able to go after victories and put my name on those lists are things that I focus on.”

Leah won a reported $352,985 at Fallsview and that figure is almost half of what Leah earned in Season XIII in Los Angeles. Then, three-time WPT Champions Club member Anthony Zinno beat Leah heads up in the WPT L.A. Poker Classic where Leah settled for $701,350. Losing always stings Leah, but this one hurt a bit more than others. It hardened Leah to return to a WPT final table and finish the job.

“I would’ve like to win LAPC, one of the more meaningful ones,” Leah said. “Winning a WPT is something I’ve always wanted to do. I wanted to get to another final table after losing LAPC heads up to Zinno. Fallsview not being televised didn’t have the same excitement. If I won LAPC and Fallsview, I’d be that much closer to three and four.”

The global poker road traveled by Leah contains a few locations where he does much better than others. Fallsview is at the top of that list. Leah won the C$1,100 preliminary event at the Fallsview Poker Classic an astounding three times in four years between 2014 and 2017. The last time Leah won the tournament, he beat a field of 1,524 to do so.

The comfort of playing in Canada and his natural drive to succeed gave Leah the extra push he needed to come out on top this February.

“If I’m playing at a venue where I’m confident and comfortable and had so much success… the other players, there’s a sense of admiration and fear and I use that to my advantage,” Leah stated. “There are people who come after me, which works out sometimes, and players who try to avoid me. If I was unable to finish the job, It would have been heartbreaking. To get close and not do it would have disappointing. I was expecting myself and willing myself to victory.”

That will to win did not detract from Leah’s overall style of poker.  When making adjustments, Leah went through his standard process. By letting the game come to him, Leah stayed relaxed in a situation he is plenty familiar with.

“I try not to get ahead of myself and didn’t make any reckless adjustments to play for the win,” Leah said. “The money wasn’t as meaningful or on my mind, I wasn’t trying to just win the tournament. It freed me up and helped my psyche on going for it and focusing on winning. I still took it one by one whether I had the chip lead or was in the middle of the pack.”

Leah was not a contender in the Hublot WPT Player of the Year race and adds that is another trinket he would love to have. Factors that weigh Leah’s decision include location and prize pool. The schedule Leah maps out conflicts with quite a few WPT Main Tour events, but he’s not ruling out the chase for one of the most sought-after awards in poker.

“One of these years, I will play a full WPT season,” Leah said. “If I have a pretty good result at the start of the season, it would be good motivation. The competition I enjoy. The sense of accomplishing something outside of money and making a living, the place in history would be cool – a combination of everything. If I set out to do it, it would feel amazing to get it done.”

The next WPT event for Leah is the WPT Tournament of Champions at ARIA Resort & Casino. Similar to WPT Seminole Hard Rock Poker Showdown gold medalist Scott Margereson, Leah is consumed with the PokerStars Spring Championship of Online Poker (SCOOP).

Leah doesn’t expect to play the $10,000 buy-in WPT Bobby Baldwin Classic as it conflicts with the SCOOP Main Event.

A hiatus from live poker does not distract Leah from his goals. To win the WPT Tournament of Champions adds another level of prestige to Leah’s career when he looks around at competitors.

“I’ve followed it for the last few years and know the guys who have won fairly well,” Leah told WPT.com. “To know that I can play in it every year and compete in a fun field and have a chance to win a tournament like that and the fact that is going to be televised. I look forward to competing in it this year and have a chance at winning. It’s definitely an event that I want to play in every year.”